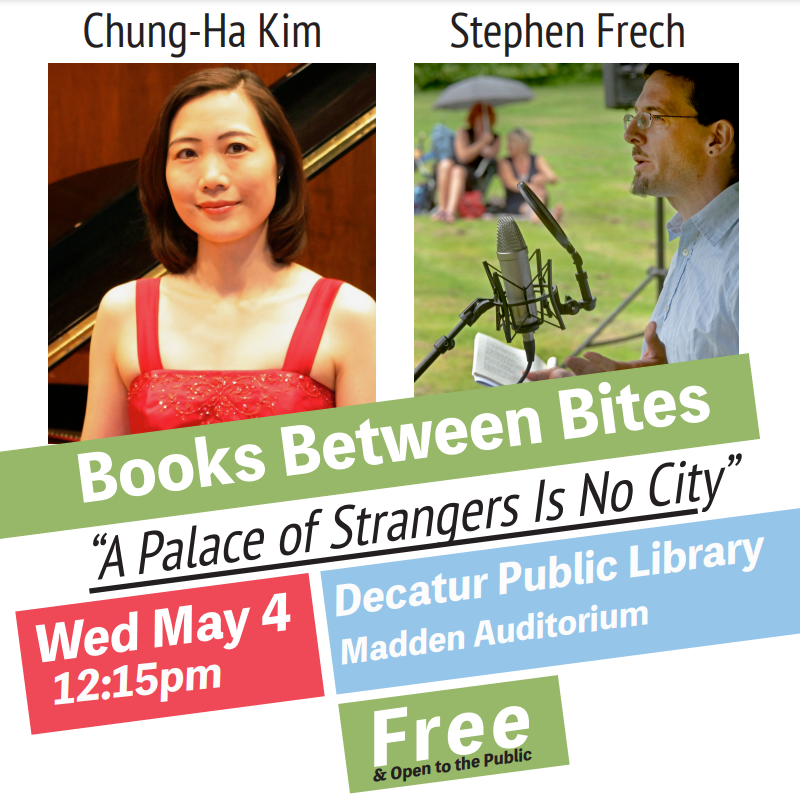 Books Between Bites May

A Palace of Strangers is No City

A Palace of Strangers Is No City tells the story of two lovers on opposite sides of an occupied city. We accompany the main character as he tries to find his way back to his fiancé, past checkpoints and pursued by brutish police squads. Reviewer Roseanne Ritzema described it as surreal and mysterious:

Stephen Frech writes with taut phrasing, surreal imagery and a mysterious sense of reality. A Palace of Strangers Is No City is an engaging and haunting prose poem sequence that gives us a dark, disoriented view […] Beauty, art and love are continually compromised by external restraints. Reality and fantasy are often intertwined. Frech combines surreal imagery with tight description to give cohesion to the sequence. […] Along the way we may briefly connect with others but we ultimately make the journey alone. Mystery provides significant tension in this striking sequence of prose poems. (Presa Literary Journal)

A Palace of Strangers Is No City makes use of a highly unusual second-person narrator and it reads as a continuous narrative comprised of prose poems and flash fiction. The sequence was named as a finalist for the Italo Calvino Prize, an international prize in fabulist fiction.

In 2013, Stephen Frech and Chung-Ha Kim released a CD that combines a reading of A Palace of Strangers Is No City with piano pieces from On an Overgrown Path by Czech composer Leoš Janáček. The piano pieces are programmatic and provide musical reflections on key moments of the book. The Midwest Book Review called the cd “dreamlike yet suspenseful.”

Dr. Stephen Frech earned degrees from Northwestern University, Washington University in St. Louis, and the University of Cincinnati. He has published five volumes of poetry: Toward Evening and the Day Far Spent (Kent State University Press, 1996), If Not For These Wrinkles of Darkness (White Pine Press, 2001), The Dark Villages of Childhood (The Midwest Writing Center, 2009), A Palace of Strangers Is No City (Cervena Barva Press, 2011), and Into Night’s Tent (River Glass Books 2020). He also published a translation from the Dutch of Menno Wigman’s book of poems Zwart als kaviaar/Black as Caviar in 2012. Stephen Frech is founder and editor of Oneiros Press, publisher of limited edition, letterpress poetry broadsides. Oneiros broadsides have been purchased by special collections libraries around the world, among them the Newberry Library (Chicago), the Beinecke Library at Yale, and the University of Amsterdam Print Collection. He is a Professor of English at Millikin University where he teaches letterpress printing and helps to operate two presses: Blue Satellite Press and Sting & Honey Press.

Dr. Chung-Ha Kim was born and raised in Germany. She moved to New York City in 1995 where she completed a Bachelor of Music in Piano Performance at the Manhattan School of Music. She subsequently earned a Master of Music and a Doctor of Musical Arts at the University of Cincinnati’s College-Conservatory of Music. Dr. Kim was named a Steinway Artist in 2014 and became a Nationally Certified Teacher of Music in 2016. She has released three CDs that are available on Amazon and iTunes: Maurice Ravel: Miroirs (2013), A Palace of Strangers (2013) and Carnival of Animals (2014). Her students have been awarded scholarships by the Decatur Area Music Teachers Association (DAMTA), the Symphony Orchestra Guild of Decatur, and the Springfield Federation of Music Clubs (SFMC). Dr. Kim is an Adjunct Associate Professor of Music at Millikin University where she teaches Preparatory Piano, Class Piano, and Piano Pedagogy.