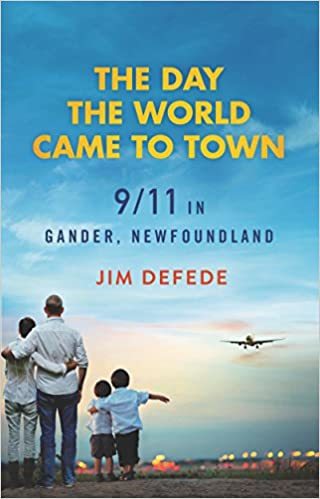 Book: The Day the World Came to Town by Jim DeFede

The True Story Behind the Events on 9/11 that Inspired Broadway’s Smash Hit Musical Come from Away, Featuring All New Material from the Author

When 38 jetliners bound for the United States were forced to land at Gander International Airport in Canada by the closing of U.S. airspace on September 11, the population of this small town on Newfoundland Island swelled from 10,300 to nearly 17,000. The citizens of Gander met the stranded passengers with an overwhelming display of friendship and goodwill.

As the passengers stepped from the airplanes, exhausted, hungry and distraught after being held on board for nearly 24 hours while security checked all of the baggage, they were greeted with a feast prepared by the townspeople. Local bus drivers who had been on strike came off the picket lines to transport the passengers to the various shelters set up in local schools and churches. Linens and toiletries were bought and donated. A middle school provided showers, as well as access to computers, email, and televisions, allowing the passengers to stay in touch with family and follow the news.

Over the course of those four days, many of the passengers developed friendships with Gander residents that they expect to last a lifetime. As a show of thanks, scholarship funds for the children of Gander have been formed and donations have been made to provide new computers for the schools. This book recounts the inspiring story of the residents of Gander, Canada, whose acts of kindness have touched the lives of thousands of people and been an example of humanity and goodwill.

As an adult book, Sam Quinones's Dreamland took the world by storm, winning the NBCC Award for General Nonfiction and hitting at least a dozen Best Book of the Year lists. Now, adapted for the first time for a young adult audience, this compelling reporting explains the roots of the current opiate crisis.

In 1929, in the blue-collar city of Portsmouth, Ohio, a company built a swimming pool the size of a football field; named Dreamland, it became the vital center of the community. Now, addiction has devastated Portsmouth, as it has hundreds of small rural towns and suburbs across America. How that happened is the riveting story of Dreamland. Quinones explains how the rise of the prescription drug OxyContin, a miraculous and extremely addictive painkiller pushed by pharmaceutical companies, paralleled the massive influx of black tar heroin--cheap, potent, and originating from one small county on Mexico's west coast, independent of any drug cartel.