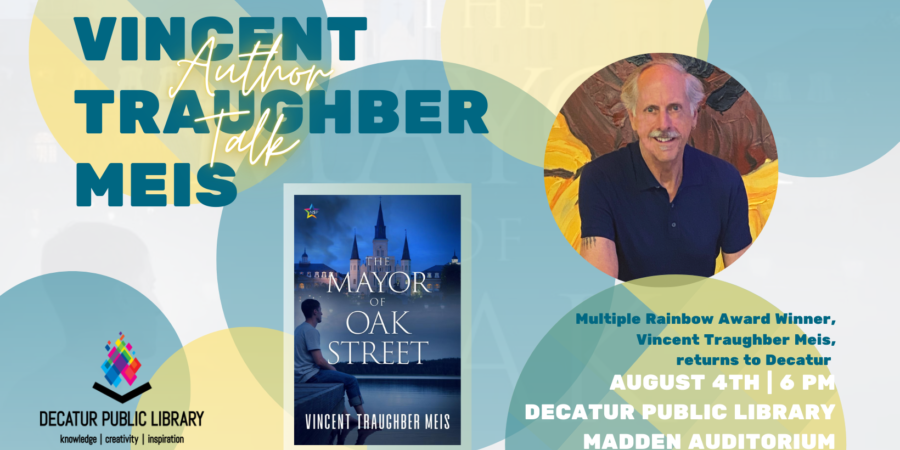 "The Mayor of Oak Street"

In this story a boy with an obsession for snooping on his neighbors and an infatuation with a young doctor down the street becomes a man stumbling through a landscape of sex, drugs, and rock and roll in the 1960s and 1970s, looking for somebody to love. The novel should find a home with anyone interested in LGBTQ themes and/or any reader enticed by a heartfelt coming-of-age story.

Vincent Traughber Meis grew up in Decatur, Illinois and graduated from Tulane University in New Orleans. He has also traveled extensively, and as result of his travels and time abroad he published a number of pieces, mostly travel articles, but also a few poems and book reviews, in publications such as, The Advocate, LA Weekly, In Style, and Our World in the 1980s and 90s. He has published five novels with Fallen Bros Press: Eddie’s Desert Rose (2011), Tio Jorge (2012), and Down in Cuba (2013), Deluge (2016) and Four Calling Burds (2019). Tio Jorge received a Rainbow Award in the category of Bisexual Fiction in 2012. Down in Cuba received two Rainbow Awards in 2013. Deluge won a Rainbow Award in 2016. Recently his stories have been published in several collections, including WITH: New Gay Fiction, and other collections.