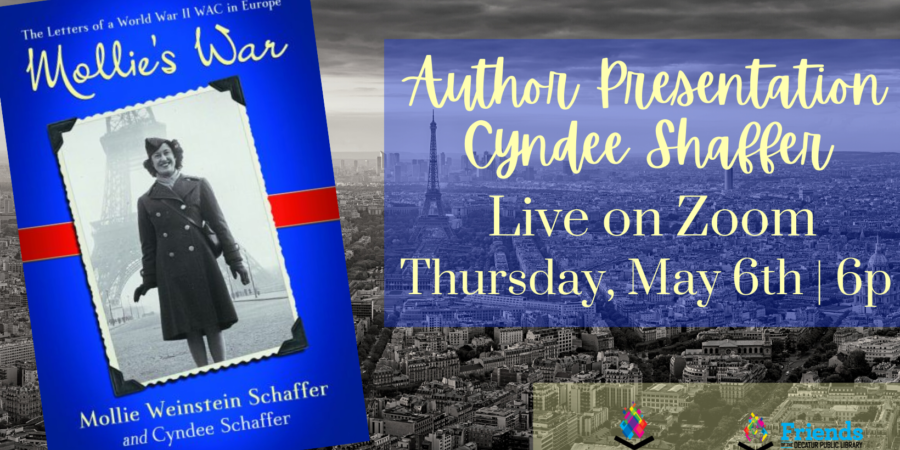 "The Journey to Mollie's War: WACs and WWII"

Members of the Women’s Army Corps (WACs) were the first women other than nurses to serve overseas in World War II. Cyndee Schaffer’s mother, Mollie Weinstein Schaffer, was one of them. Drawing upon excerpts from Mollie’s letters written home during the war, this presentation provides a romantic, yet frightful, glimpse into the life of a woman in uniform during this crucial time in history. It details Mollie’s experiences from basic training in Florida in October 1943 to the dramatic moment when the Statue of Liberty came into view upon her return in November 1945. It traces the footsteps of the women who served in Europe, following Mollie and her fellow WACs who were stationed in London, England before D-Day and during the post D-Day German buzz bomb attacks. The WACs were transferred to Normandy, and then to Paris after its liberation by the Allies. After VE Day (Victory in Europe), they served in Versailles. Finally, they traveled to Frankfurt, Germany, as part of the Army of Occupation and witnessed firsthand the devastation of that country before returning to the United States. This presentation will invite contemplation of the vital and varied roles that women have fulfilled in the American military.

Cyndee’s presentation is divided into three parts–the role of women in the military, her mother’s experiences in WWII stationed in Europe and finally the writing adventure from working with her mother on her memoir and learning about the WACs to finding a traditional publisher. This is a first-person accounting of the role of women in the military in WWII stationed in Europe. Cyndee uses PowerPoint and two videos including a 9-minute WAC recruiting movie called “It’s Your War, Too” from 1943 in which her mother had two cameo appearances.

Cyndee engages the audience to discuss their experiences in the military or the experiences of their spouses/children/parents/grandparents. Everyone seems to have stories about the military and how it relates to their families. She is always amazed at how many people tell her that they are going home to work on their parents’ letters.