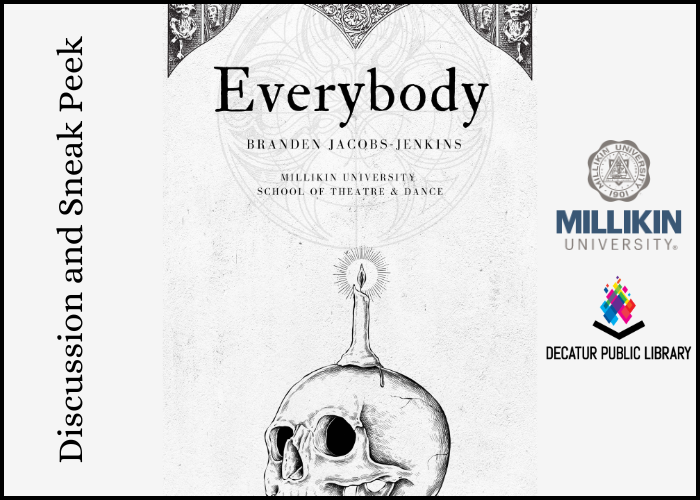 Making Everyman for Everybody

Staging a 15th-Century Morality Play in the 21st-Century

Come join us for a conversation with the professors and creative artists behind the fall production at Millikin University’s School of Theatre and Dance, Branden Jacobs-Jenkins’ Everybody. Adapted from the famous medieval morality play, Everyman, Everybody takes audiences on a surprisingly funny and meaningful journey to meet God and embrace Death at the end of one’s life.

In the fifteenth-century morality plays were not only the popular entertainment of the day; they were also a mode of education for a public who could not read. Morality plays use allegorical figures to help convey a religious or moral idea. These parables usually dramatize a human character’s journey through life, their temptations and sins, their encounter with death, and their pursuit of salvation. To help communicate these important lessons, the main character did not have a specific name; instead, they symbolized the entirety of the human race and usually had a name like “Everyman” or “Mankind.” Other characters we meet in the original play Everyman are “Beauty,” “Pleasure,” and “Good Deeds.” Actors were tasked with personifying these characters through recognizable stereotypes. “Beauty,” for example, might be played by a conventionally attractive person, who might carry a mirror and be engrossed in themself. Original morality plays were traditionally performed by actors who were in local amateur troupes with simple staging, few props, and many locations left to the audience’s imagination.

So how do you make a play that is over 600 years old relevant to audiences today? Jacobs-Jenkins reinterprets “Everyman” literally, and the script for this play demands that anybody in the cast can play Everybody: this means that the cast draws their roles for the night in a live lottery before the audience. With over 24 distinct variations of the performance, audiences are likely to see a version of the show never performed before. During this sneak peek into the upcoming Millikin production from Oct 13-16, you’ll have an opportunity to hear more about the playwright’s process, learn more about the history of morality plays, the director’s approach to bringing this work to the Decatur community, view elements of costume design, and enjoy a scene from the show. Come join us as we explore the world of theatre!